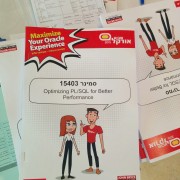 I have seen the future and it is glorious: SQLcl the next generation of SQL*Plus