How Did I Become a Public Speaker: My First Time

You are here: Home1 / Blog2 / How Did I Become a Public Speaker: My First Time 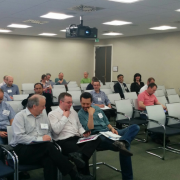 My OOW Experience, the Prequel
Scroll to top