OUG_SCOT: I was on fire and then the fire alarm went off

You are here: Home1 / Blog2 / OUG_SCOT: I was on fire and then the fire alarm went off 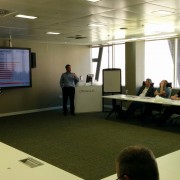 Oded’s Session on Security in the Cloud is now (oug_scot)

I have seen the future and it is glorious: SQLcl the next generation of SQL*Plus

Moving Datafiles Online in Oracle 12coug_scot: SQLcl the next generation of SQLPlus Presentation
Scroll to top